For all of 2020 and likely most of 2021, Apple events have migrated to pre-recorded and virtual settings in accordance with the ongoing Coronavirus pandemic. But this has not slowed down Apple’s steady releases of iPhones, iPads, Pencils, Macs, MacBooks, HomePods, AirPods Max, Watches and a Mac-based silicon M1. Plus there were the new operating systems including Mac’s macOS Big Sur.

April 20’s ‘Spring Loaded’ event was announced exactly a week ago and by then many rumours swirled online about what would be announced by CEO Tim Cook, Senior Vice President of Software Engineering Craig Federighi and their team of engineers.

Speculations across the Internet and tech circles alike suggest Apple will launch new iPad Pros and a companion Pencil. Also anticipated are upgrades of the company’s best-selling AirPods, that are likely to be named AirPods 3 and will resemble the design of the AirPods Pro. Other rumours spell launches of new iMacs and Apple TV streaming set-ups.

But probably the most exciting – yet unconfirmed – expectation is the launch of AirTags, Apple’s native tracking device which would be the answer to the widely-popular Tile. With Bluetooth-connectivity, the AirTags are said to have chipsets that are tracked from your Mac, iPhone or iPad; and the AirTags can be companions to items that users often find themselves losing, such as backpacks and car keys. The app used for AirTags activity is Apple’s Find My.

There are more events confirmed for the summer ahead. The iconic annual Worldwide Developers Conference (WWDC) will take place virtually, like last year’s edition, from June 7 till 11. The event is free for all developers, and will offer unique insight into the future of iOS, iPadOS, macOS, watchOS, and tvOS.

Display improvements include 10,000 mini-LEDs on the 12.9-inch Liquid Retina XDR display which up the brightness of the device enabling 1000 nits of full brightness.

The iPad Pro 2021 comes with more intuitive cameras which work in low-light environments, and an updated True Depth camera with a 12MP ultra-wide camera. The latter comes with CentreStage, which automatically pans with the moving subject. (Yes, the Internet is already flooding with jokes pointed at Facebook’s Mark Zuckerberg who may be worried for Portal.)

It’s not over: iPad Pro comes with 5G data capabilities. The next urging; India, bring on the 5G!

The new line of slim iMacs come in a range of seven colours. These computers are powered by Apple’s M1 SoC (system on a chip) and macOS Big Sur, for faster performance. Apple says this iMac is 85% faster than its predecessor, and offers 50% faster GPU performance.

Compared to the previous iMac, these new devices have a much smaller logic board and has two small fans to keep the system cool and quiet, under 10 decibels. This reduces the iMac’s volume by upto 50%.

The display is 24 inches and has 11.3 million pixels, and Apple’s signature True Tone colour gamut

As we continue to live in the age of virtual interactions, the new iMac has a 1080p HD FaceTime camera and a larger sensor for low-light environments, with Apple calling it the “best ever camera on a Mac.” Hopefully this will be an improvement that flows into MacBooks as well. The iMac also has an improved microphone and six-speaker sound system for crystal clear sound, that supports Dolby Atmos. 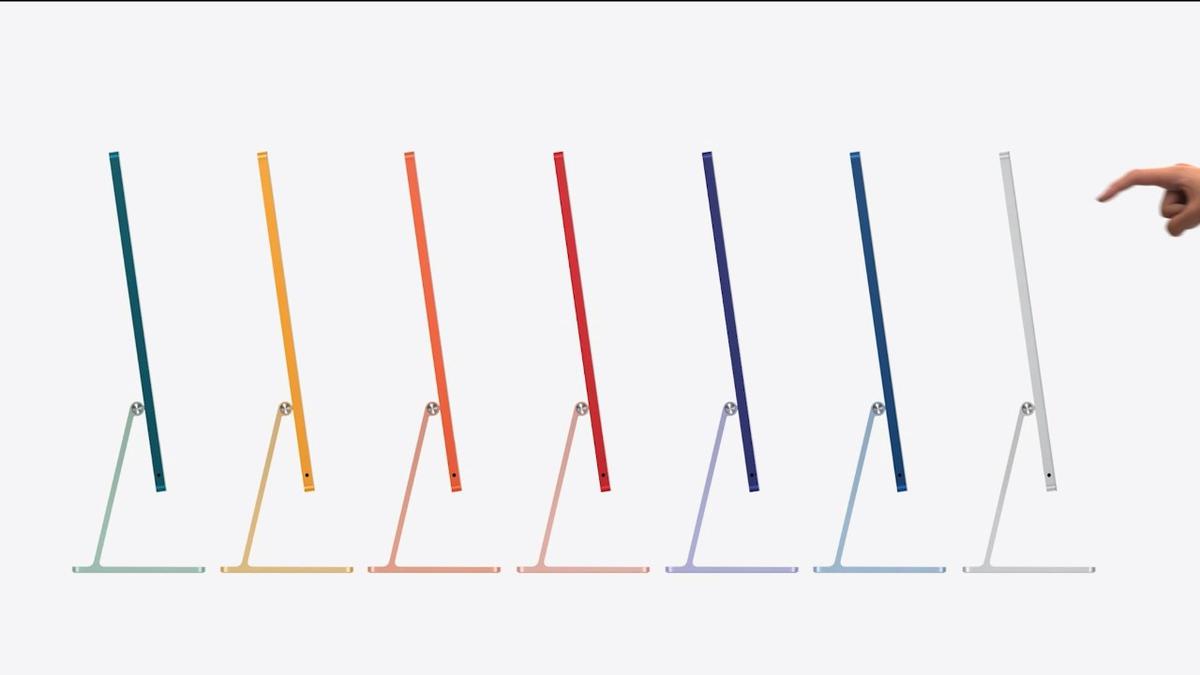 These iMacs come with colour-matched Magic Mouse’s, trackpads and keyboards. Apple TV 4K is here! The new Siri-enabled remote has a click pad, and a new outer-ring. It even gets a power button and the siri button is on the side just like the iPhone. The streaming device’s remote, made from recycled aluminium, will be available in the second half of may and can also be used for your television. It will cost $179 for 32 GB and $199 for 64 GB. 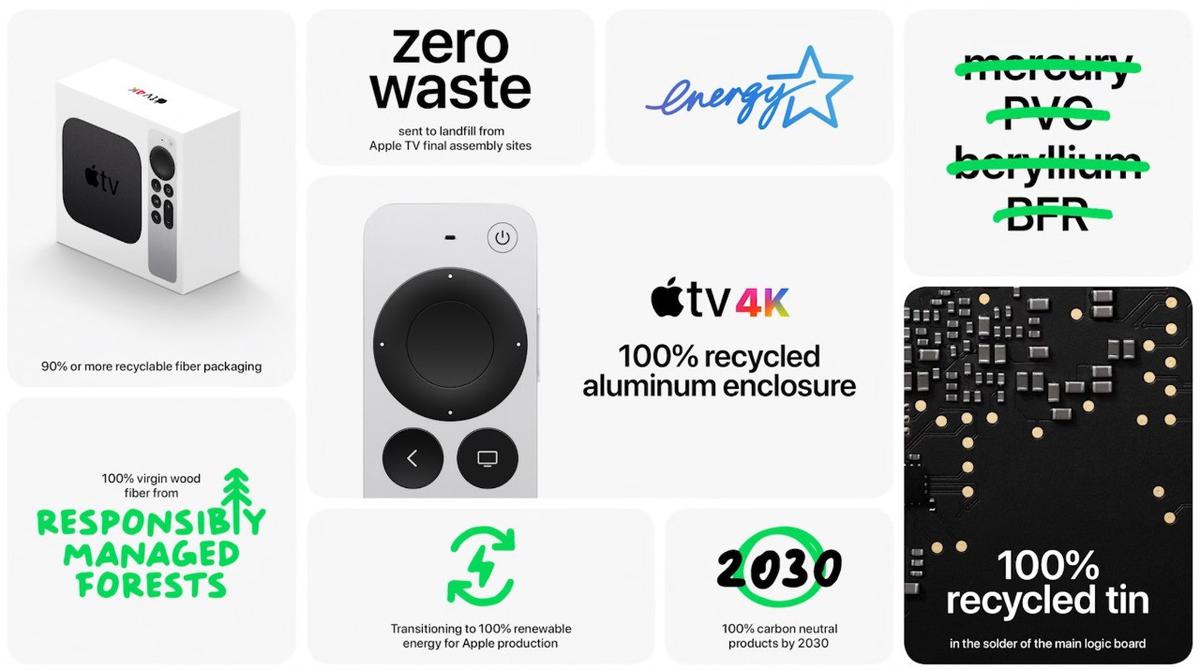 Apple’s Find My App is finally compatible with third-party devices. And as predicted, Apple has announced AirTag for $29 which will be available from April 30 in the United States. French luxury design house has also worked with Apple for a line of authentic leather luggage tags. AirTag can be personalised with engravings, feature ‘unwanted tracking alerts’, over a year of battery life, a built-in speaker, and a U1 native chipset, as well as Precision Finding

A new colour launch for the iPhone series! Cook proudly announces a lavender purple for the iPhone 12 series in addition to Stunning silver, Ground-breaking graphite, Glorious gold, Pacific blue. This colour will be available from April 30. 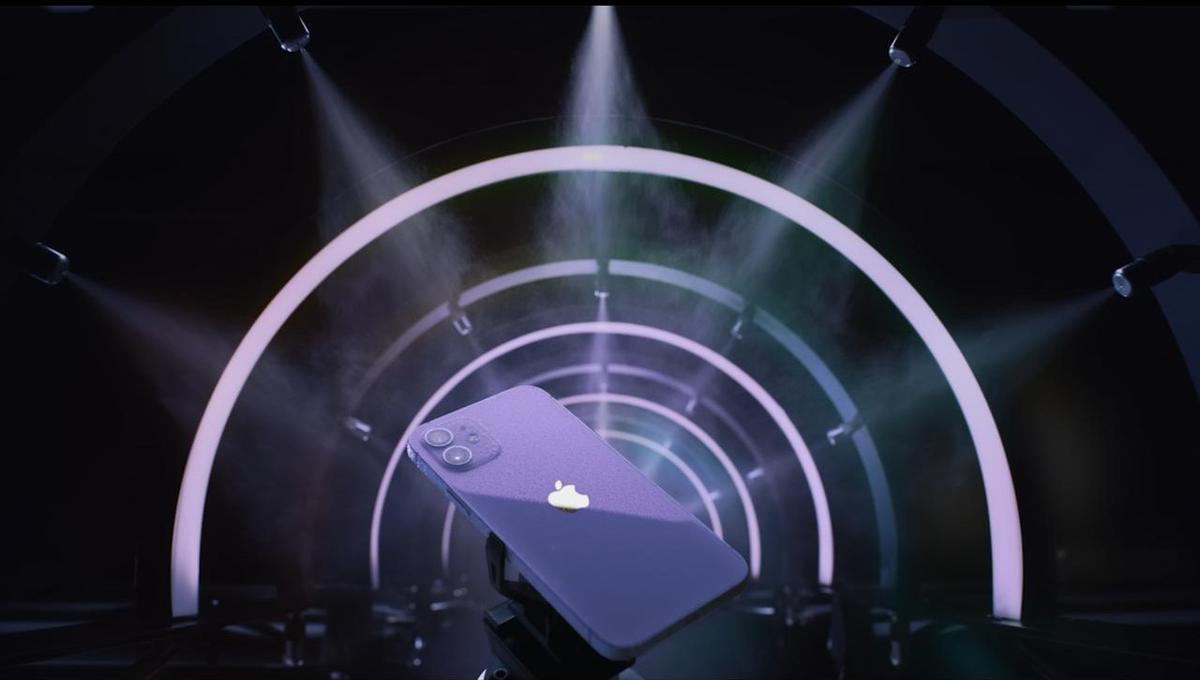 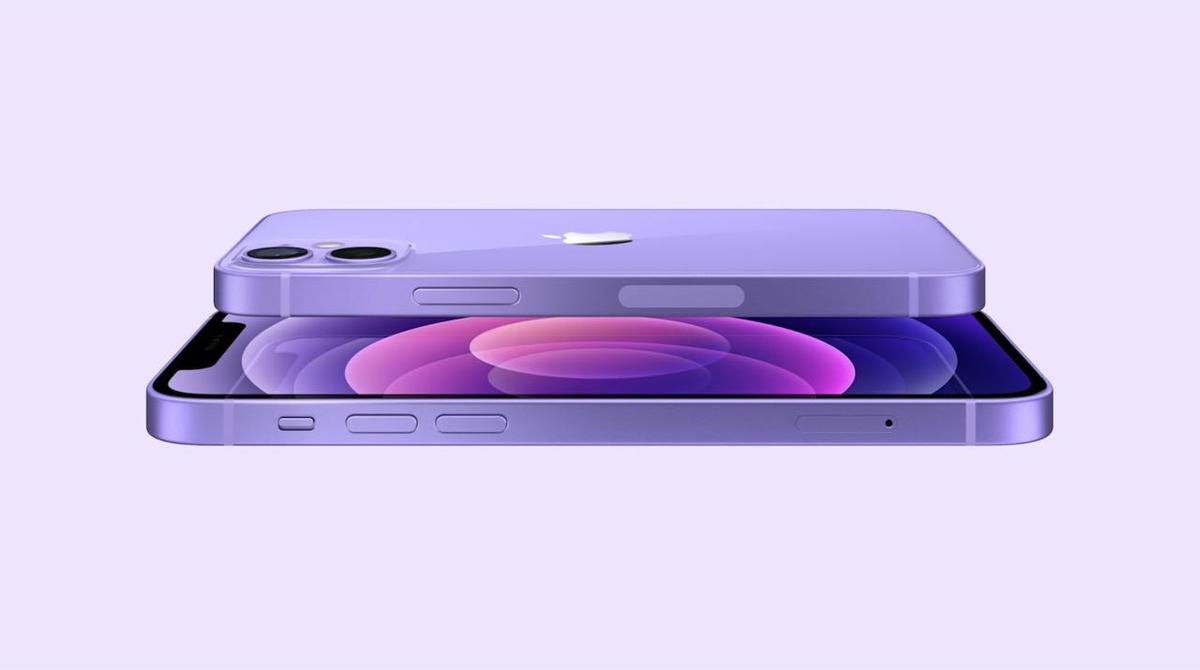 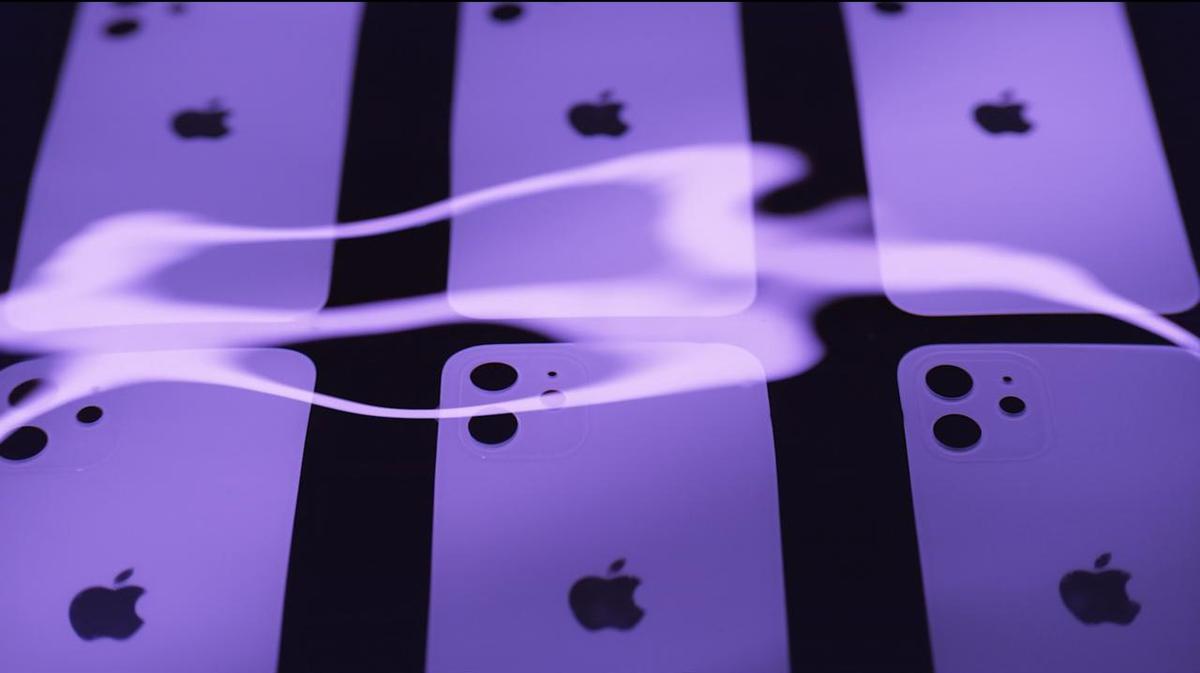 To pay homage to a 2020 of podcast boom, Apple Podcast app will see a renewed interface. 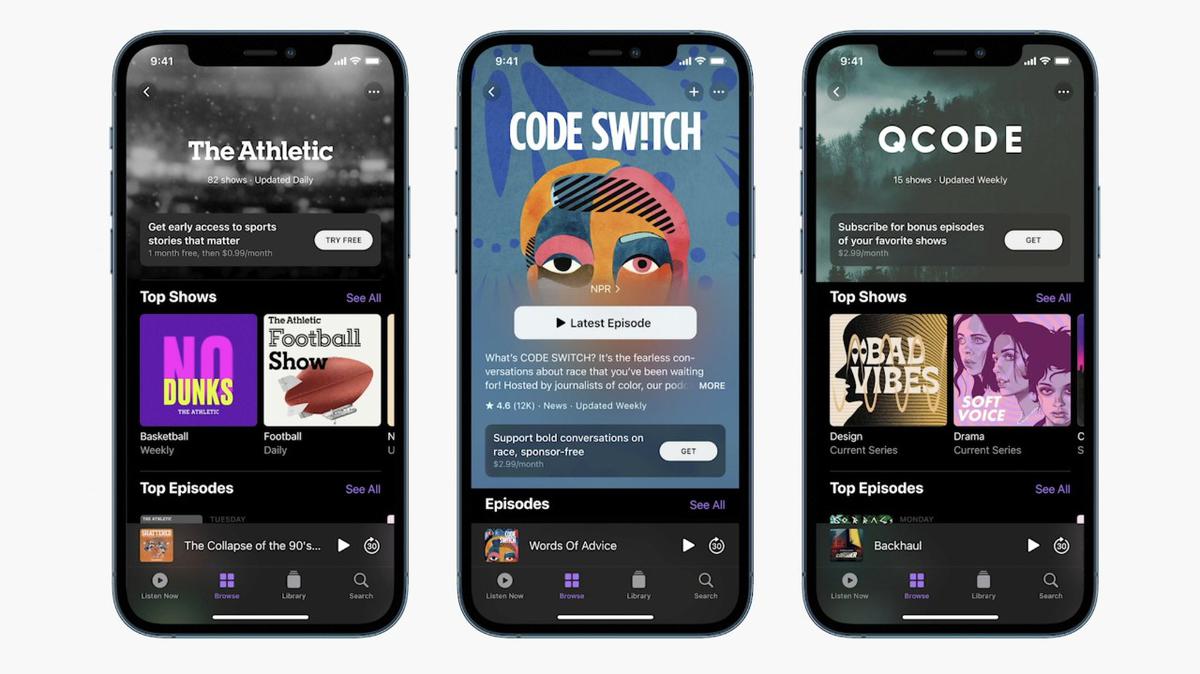 Cook talks of Apple’s $200 million Restore Fund, which aims to remove one million metric tons of carbon dioxide from the atmosphere annually.

Apple’s renewable energy practices power up with 110-plus suppliers, including those from India

On March 31, Apple announced that more than 110 of its manufacturing partners around the world are moving to 100% renewable energy for their Apple production, with nearly 8 gigawatts of planned clean energy set to come online. Once completed, these commitments will avoid over 15 million metric tons of carbon dioxide equivalent (CO2e) annually — the equivalent of taking more than 3.4 million cars off the road each year, and a major energy storage project in California will pilot new solutions for renewable infrastructure.

Apple Inc is commencing assembly of its iPhone 12 model in the country, a move expected to help the firm consolidate its position in the smartphone market in India. Apple has partnered with third-party manufacturers such as Foxconn and Wistron to make some of its phones in India.

Apple launched M1 chip for the Mac in its previous event

At the November 10 ‘One More Thing’ Special Event, streamed virtually from Apple Park, California, Tim Cook and his team at Apple unveiled the first Apple Silicon SoC (system on a chip): M1. Apple Silicon, which has taken close to a decade to perfect, was first announced at the virtual Worldwide Developer Conference 2020 (WWDC20) but now, let’s get into the M1’s intricacies.